Five-Year Mission: “The Naked Time” and “The Enemy Within” Review

FIVE-YEAR MISSION will explore Gene Roddenberry’s original Star Trek TV series with special emphasis on its impact on television and fandom history. The beloved series is full of televised firsts, and its sunny, optimistic brand of space liberalism has been either a template or a foil for every American sci-fi series to come after. Rather than episode-by-episode recaps, this series will aim to provide a holistic look at how Star Trek: The Original Series shaped pop culture and left the stuff of cosmic creation in its wake.

“The Naked Time” lets our heroes get real with a little help from a deadly space pathogen. 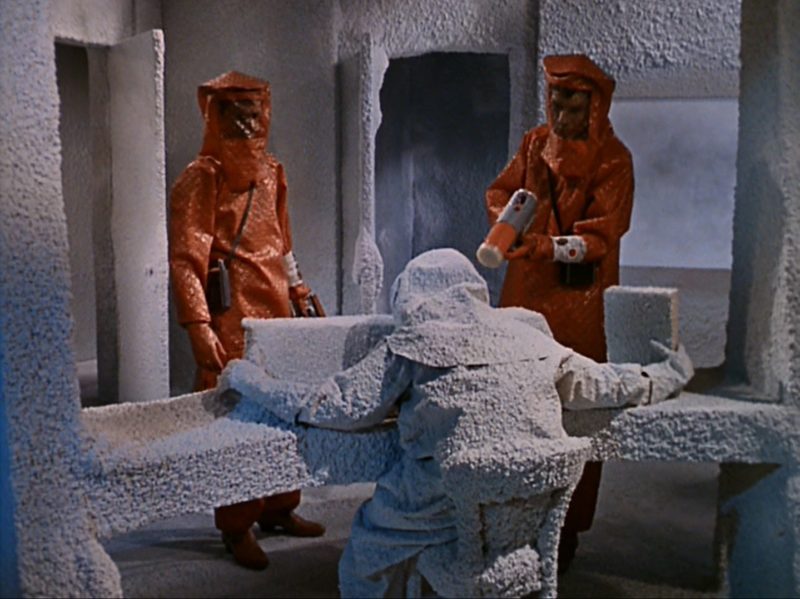 “The Naked Time” opens with Spock and Lt. Tormolen, our redshirt du jour, exploring a frozen research base on a planet that is about to self-destruct. What they find is unsettling—a woman strangled, an engineer frozen at his post, a man who died showering fully clothed—all the bodies frosted over with the extreme cold. (Speaking of showers, I would like to congratulate the costume department on their clever use of what look like patterned shower curtains to create the stylish but not super effective-looking cold suits.) It’s reminiscent of the visit to the abandoned Antarctic research facility in The Thing, and the effect is quite chilling for a ‘60s TV production.

Tormolen proves the theory of natural selection by taking off his glove and touching a strange red substance, and he soon starts acting strangely once back aboard the Enterprise, babbling about how mankind was never meant for space travel. After a mild case of self-perforation with a butter knife, he inexplicably dies on the operating table, leaving Bones and Chapel to figure out why. The scuffle he had with Sulu and Riley—AKA pre-Chekhov—finds them both showing signs of a strange infection. Turns out the alien substance is spread by touch and acts much like alcohol, causing hidden parts of a person’s personality to come to the surface, often with disastrous results.

Riley, at least, is a happy drunk; his caterwauling rendition of “I Will Take You Home, Kathleen” delivered over the comm system circles from mildly amusing to irritating to downright eerie after he takes over engineering, declares himself captain, and shuts down the engines. Even the ever-serene Uhura loses her shit after being forced to listen to it for the whole episode—seriously, does he not know any other songs? Not even “Danny Boy”?

As a fencing enthusiast, Sulu takes the opportunity to buckle some swash, and Takei’s crazy-eyed glee at playing Three Musketeers is one of the most memorable parts of a classic episode. (Spock gets one of the ep’s best lines when he instructs the crew to “take D’Artagnan here to sickbay.”)

Under the influence of the pathogen, Nurse Chapel grabs Spock’s hands and confesses she has the hots for him, causing him to apologize and flee (BIG RELATE), but not before he too contracts a case of the feels. Although it’s inevitable, Spock’s turmoil is genuinely shocking as he dissolves in tears of empathy for the plight of his human mother all alone in a society where feelings are “bad taste.” This is perhaps the first indication we get of Spock’s spectacularly unhappy early life, which will be explored in greater depth when his parents come calling in “Journey to Babel.”

Unfortunately, the planet below is fixing to explode, and the Enterprise desperately needs a science officer who’s not in the midst of a breakdown. Kirk shows up and tries to smack some sense into him and OH, NO, MY SPACE DADS ARE FIGHTING! One Vulcan slap is enough to send the captain hurtling over the conference table and give him a dose of the pathogen, which manifests as a weird rant about how his ship is a woman.

Luckily, Spock is able to overcome his emotions thanks to years of child abuse—er, mental training—and the unaffected Dr. McCoy creates a serum to counteract the infection. With the bridge crew back to normal, they restart the engines, a dangerous process that causes the ship to fly away from the exploding planet so quickly they actually travel back in time three days. The naked time might have been erased from the chronometer, but the insights it provided about our voyagers are here to stay.

Shatner serves up a juicy slice of Canadian ham in the pulptastic “The Enemy Within.” 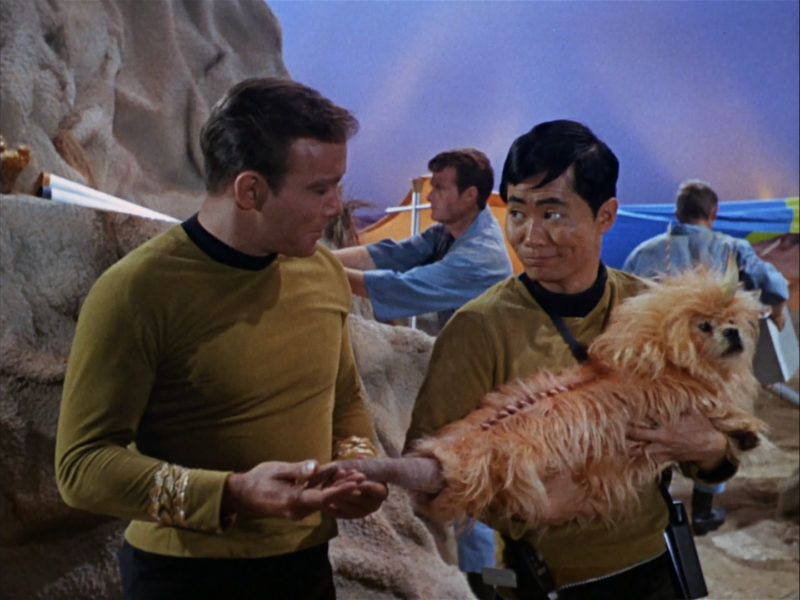 Ah, the transporter malfunction—springboard for a multitude of Trek plots. For technology our heroes rely on so heavily, the transporter certainly seems to present more than its fair share of flukes, hiccups, and Cronenbergian body horror. In this case, the result is an evil double of our intrepid captain hellbent on devouring every square inch of scenery that isn’t nailed down.

Then things take a dark turn.

After several episodes of one-sided, inappropriate sexual tension with Yeoman Rand, things finally come to a head as Evil Kirk follows her to her quarters after scoring some Saurian brandy from Bones. With all the creepiness that’s been simmering on Kirk’s end since the show began, viewers are primed to feel alarmed for the safety of Rand and her majestic basket-woven beehive. Shatner really leans into the menacing physicality of Kirk’s Hyde in these moments, and his go-for-broke hamminess is really effective here. (Side note: I loved the paintings and easel in Rand’s quarters. TOS excels at these little grace notes of characterization.) Rand gives the doppel-Kirk a convenient identifying face scratch when he attacks her, and he runs off to cause more mayhem when a crewman interrupts.

Meanwhile, Sulu and his team are trapped on the planet below with temperatures rapidly dropping. Original flavor Trek has a knack for ratcheting up tension, adding stakes and urgency as the story progresses, and this B-plot works like gangbusters (as long as you don’t think too hard about why they don’t just send a shuttlecraft). George Takei plays just the right note of long-suffering good humor that shades into desperation as the thermometer keeps plummeting, proving once again that Sulu is the secret MVP of the bridge crew.

Adding another wrinkle of complication is the fact that Good Kirk is seemingly missing the attributes that make him a good commander—his decisiveness, his bravado, his belief that there’s no such thing as a no-win scenario. Shatner brilliantly underplays(!) this side of the divided Kirk, portraying him as a man who knows he’s forgetting something important but can’t quite figure out what it is.

An experiment with an animal doubled by the transporter that is obviously a dog in a costume would seem to show that the shock of reintegration causes death. However, Spock is adamant that Kirk will survive because his reason will win out—after all, his own Vulcan and human halves are able to exist in relative harmony (cue “Behind Blue Eyes”). His logical deduction—don’t call it a hunch—is correct, and the captain emerges as his old irascible self. With the transporters operational, Sulu’s party is saved.

In keeping with its themes of conquering the unknown through exploration, Star Trek displays a very Enlightenment-era concern with the divide between reason and passion. This episode represents an interesting case where it doesn’t come down fully on the side of the former. Kirk needs his nasty side, even though his nice alter-ego is the one with all the brain smarts. Particularly in later iterations, the Federation and Starfleet would come to exhibit rulebound, antiseptic qualities, valuing dispassionate bureaucrats over meat-and-potatoes types like Jim Kirk. (Have I mentioned I’m not a big TNG fan?) With that in mind, it’s refreshing to see a little flawed humanity present in the fleet’s early days.

Shirt Alert: Of course Kirk shows up shirtless. This show is for the ladies.

These two episodes aired back to back very early in Star Trek’s first season. Just when audiences were starting to get a feel for the crew of the Enterprise, they got to see them placed in situations that destabilized their very sense of self. This wasn’t just powerful drama; it was a gamble that the audience would be engaged and savvy enough to go along with complex explorations of identity right out of the gate.

For a show that was pitched as “Wagon Train to the stars,” these high-concept premises could have turned off an audience that was only in it for scantily clad green women and phasers going pew pew. Fortunately, the burgeoning nerds of America stuck with it, and using sci-fi concepts to tackle issues surrounding the self in society would become a beloved Star Trek staple.

Bands love to be like HOW DARE YOU CALL US GOTH when it's like, dude, I'm not the one making music that sounds like Bauhaus circa 1982.

You can find out more about which cookies we are using or switch them off in settings.

This website uses cookies so that we can provide you with the best user experience possible. Cookie information is stored in your browser and performs functions such as recognising you when you return to our website and helping our team to understand which sections of the website you find most interesting and useful.

Strictly Necessary Cookie should be enabled at all times so that we can save your preferences for cookie settings.

If you disable this cookie, we will not be able to save your preferences. This means that every time you visit this website you will need to enable or disable cookies again.