This is the question posed by the devil to the heroine of Robert Eggers’s 2015 film The Witch. To say yes is to accept that demonic gifts can be a blessing, to enter the night forest knowing full well what’s lurking there. If you agree to these terms, you must put morality aside and prepare to be rewarded with rapturous beauty in its place. This is the tempting offer viewers get from Bryan Fuller’s televised version of the Hannibal Lecter mythos.

Hannibal follows Will Graham (Hugh Dancy), an FBI profiler and lecturer at Quantico who catches killers by getting inside their heads so completely he often has trouble getting himself out. Prickly, rumpled, and damaged by his grisly work, Will is our point of view character, and when he steps into the gilded world of renowned psychiatrist Hannibal Lecter (Mads Mikkelsen) we’re as dazzled as he is. The good doctor is tasked by FBI Behavioral Science head Jack Crawford (Laurence Fishburne) with looking after Will’s mental wellbeing (excellent call, right there), and together they unravel horrific crimes when Hannibal’s not busy serving one half of Baltimore high society to the other.

Hannibal is a police procedural’s fever dream—its case-of-the-week format slowly lures you into an intense psychodrama unlike anything else on TV. As the series progresses, it sheds its cop show trappings, becoming something far more unpredictable and terrifying. Fuller plays fast and loose with the Thomas Harris novels, putting lines from their deliriously purple prose in the characters’ mouths at unexpected moments. It’s more of a fugue than a direct adaptation, and fans of the books will be delighted at how Fuller subverts the source material while staying true to its art-pulp tone.

The show is far more interested in psychology and elliptical, metaphorical discussions about death and God than it is in the minutiae of crime scene investigation. These heady themes, combined with torrents of blood and a pervasive sense of dreamlike sensuality, meant that it struggled to find an audience even as critical accolades rolled in. It’s a small miracle it managed to run—on NBC of all places—for three seasons.

Hannibal is arguably the most visually ambitious television drama of all time. Every shot of Hannibal’s laden table resembles a painted still life. The ravenous camera lingers on the play of light and dark on beautiful bodies and blood-drained corpses alike. Brian Reitzell’s percussive, atonal soundtrack is wonderfully unnerving, alternating between snatches of classical music and frenzied drums.

Elegance and brutality gradually become intertwined. We examine scenes of horror in such minute, abstracted detail that the content starts to become divorced from the lovely imagery. An extreme closeup enters the throat of an opera singer to reveal the gross bodily mechanics behind her voice’s beauty. Blood on white fabric is made to resemble gems or rose petals. The show is a garden of earthly delights, relishing the pleasures of the flesh. And all flesh, Hannibal is keen to remind us, is meat.

After a while, the show’s macabre beauty starts to work its magic. You find yourself, like Will Graham, taking on the perspective of a murderer. “God, he’s a bastard,” you think, whenever Hannibal casually induces a seizure in Will or lops off a human foot to turn the leg into a nice osso buco. “I wish he’d cook for me.” 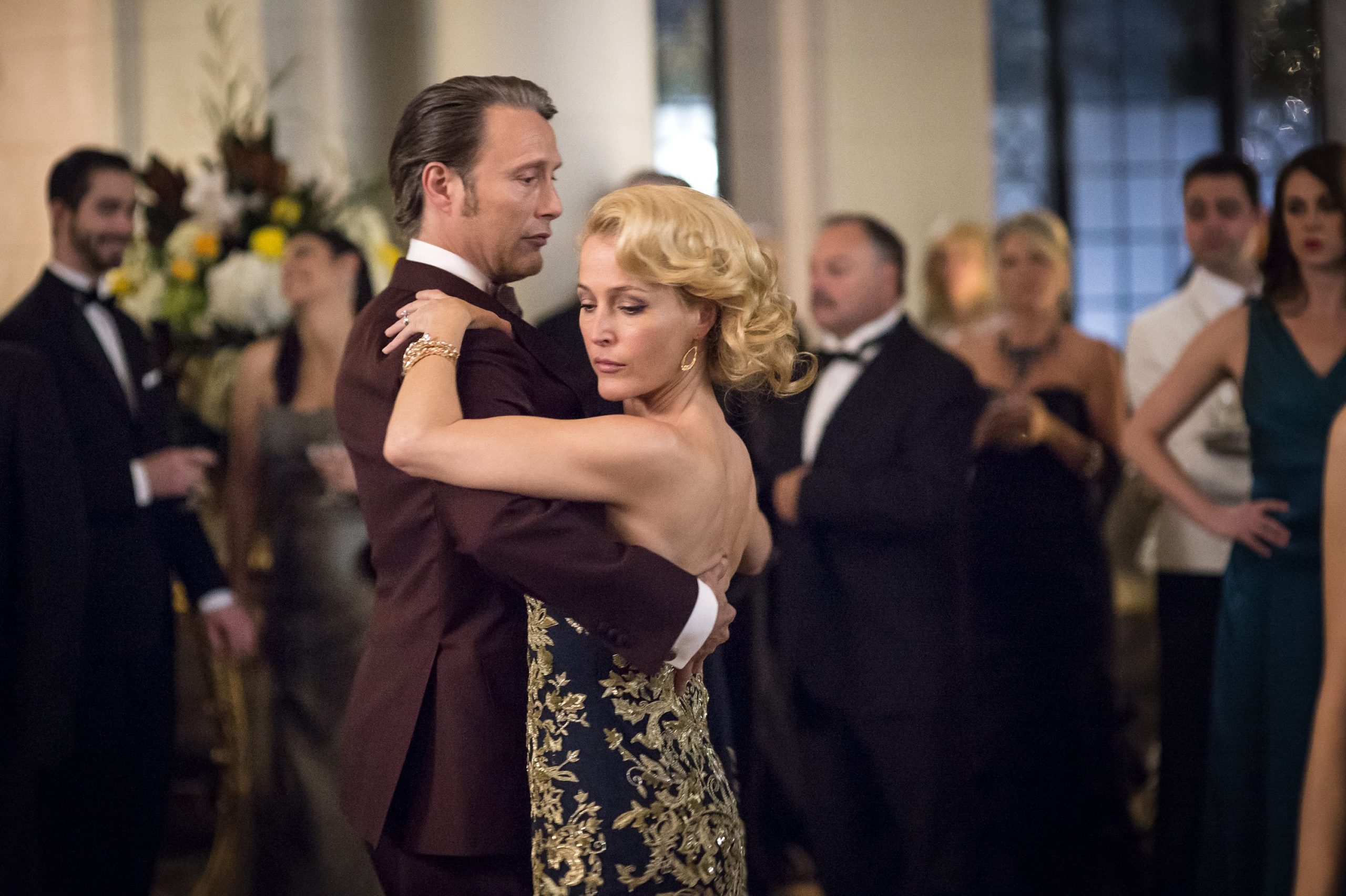 Hannibal’s psychiatrist Bedelia DuMaurier (a deliciously icy Gillian Anderson) tells him in the beginning of Season 3 that he no longer has ethical concerns, only aesthetical ones. (Although the idea that he ever had ethical concerns is pretty laughable.) This is not only Hannibal’s guiding principle; it’s also the show’s. Hannibal takes on the point of view of its eponymous monster, drawing us into a world where beauty is the only thing that matters. Fuller explains: “Every moment of the series, consciously plays with the juxtaposition of gorgeousness and visceral terror with the effect, at times, of slowly luring the audience into a sense of collusion with Hannibal.”

Fuller accomplishes this feat by creating a dreamlike, highly aestheticized mise-en-scène for his characters to wander through like vampire hunters in a misty graveyard. Every design element is heightened to the point of being slightly uncanny. The costuming is wonderfully ludicrous—Will Graham is the only main character who dresses remotely like a normal human being; every single interior looks like a Flemish painting, all saturated jewel tones and opulent textures. Even the FBI settings have a stark, midcentury kind of glamor. In such an over-the-top universe, it’s hard to blame Will for having trouble telling the difference between hallucinations and reality.

And, my God, just look at the food: 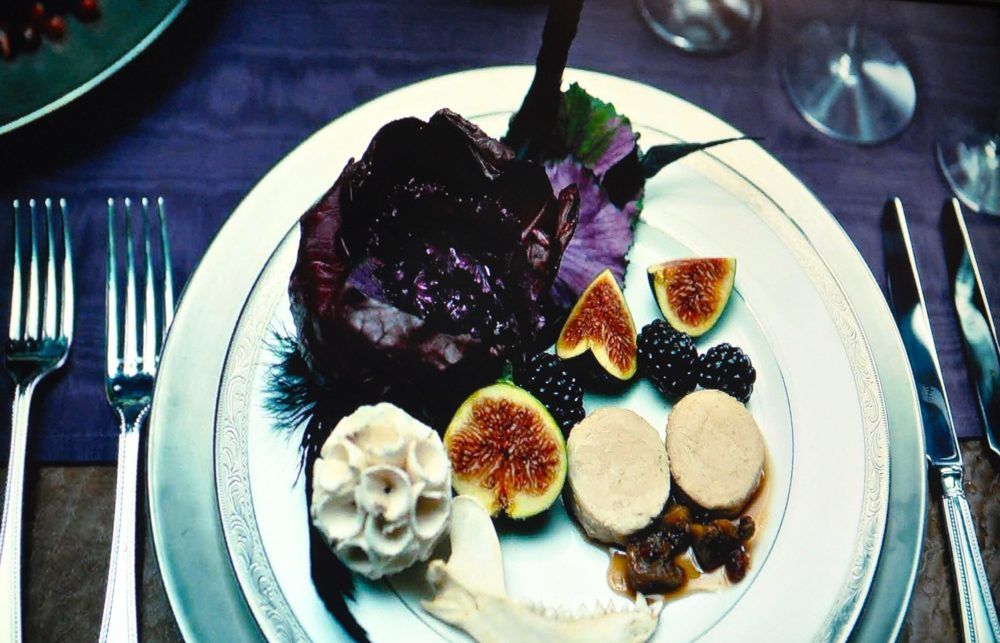 The show’s splendid aesthetic also extends to its careful treatment of gore and violence. Its fountains of blood tend to be abstract and suggestive rather than realistic. We usually see the aftermath of violence rather than the moment of its inception. In a similar vein, Bryan Fuller commits to a vision of psychological horror that excludes sexual violence. Hannibal doesn’t traffic in the kind of lurid titillation that often haunts the cops-versus-killers genre. Rather than dwelling on ugliness, Hannibal elevates its pulpy subject matter to art. 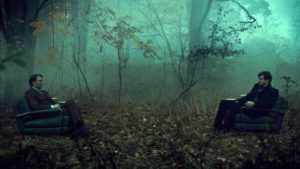 For all its obsession with external appearances, Hannibal is a show about the terror and exhilaration of being truly, deeply known. Its central characters are both marginal and closed off from normal human relationships, either by habit or inclination. Will Graham is widely believed to be a “broken pony,” and Hannibal, well, we all know there’s no word for what he is. The pair’s mutual alienation makes their connection all the more electric.

Seeing is a major motif throughout the series, with Will having repeated visions throughout its run of the killer he shot in episode one, Garrett Jacob Hobbs, whispering “See?” Will’s empathy lets him see past external appearances and get at reality; he sees through Hannibal Lecter’s “person suit” when no one else can.

In the apocalyptic Season 2 finale “Mizumono,” Hannibal tells Will: “I let you know me. See me. I gave you a rare gift, but you didn’t want it.” The rare gift of seeing is what they have in common, and what they recognize in one another. Visual motifs of mirrors and merging faces illustrate their connection throughout the show’s run, a surface representation of a bond that runs much deeper. Will is both blessed and cursed with the ability to understand Hannibal in a way no one else can, and to be understood in turn in all his darkness and complexity. Unfortunately for him, nothing else can really compare. 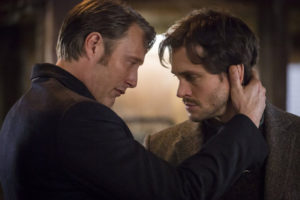 At its twisted heart, Hannibal is a love story. For all its audacious storytelling and spellbinding visuals, perhaps the most remarkable thing about the show is how it slowly morphed a psychological horror-thriller into a canonically queer romance. Hannibal unfolds as a series-long seduction—one could even, if so inclined, view it as an exceedingly dark, gory rom-com. (There’s no shortage of humor amid the beautiful carnage.) Hannibal and Will’s relationship is certainly not healthy, but it’s undeniably romantic—among other things—and it’s incredibly refreshing to see the show openly acknowledge what could have remained buried in subtext.

Hannibal and Will’s story is one of connection, understanding, and becoming, made possible by the heightened aesthetic of its nightmarish world. It’s a blood-chilling horror-thriller with plenty of room in its memory palace for operatic tragedy, romantic longing, and arch, black comedy. Hannibal is often gruesome, sometimes filled with grief, and usually alive with its title character’s irrepressible joie de vivre. It meditates on the seductive nature of evil and makes its home on the knife’s edge between disturbing and sublime.

Like Will Graham standing over a foaming sea, viewers are forced to acknowledge: it’s beautiful.

Bands love to be like HOW DARE YOU CALL US GOTH when it's like, dude, I'm not the one making music that sounds like Bauhaus circa 1982.

You can find out more about which cookies we are using or switch them off in settings.

This website uses cookies so that we can provide you with the best user experience possible. Cookie information is stored in your browser and performs functions such as recognising you when you return to our website and helping our team to understand which sections of the website you find most interesting and useful.

Strictly Necessary Cookie should be enabled at all times so that we can save your preferences for cookie settings.

If you disable this cookie, we will not be able to save your preferences. This means that every time you visit this website you will need to enable or disable cookies again.